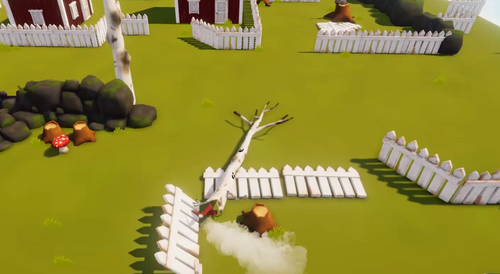 Hey Everyone! Several people had the problem that Oddytree wouldn't run correctly on their system, syptom beng that movement was not possible at all, only the balancing itself, so the tree would stay stationary and the game was not playable at all.

I already knew that the game ran differently on differently specced systems, eg running slower on low-end devices, especially having super slow movement, or on fast system, running way faster when the quality settings were set to low, as all of this is done in the physics-simulation-part of the unity engine and the game.

I checked our code and found that we forgot to include the so called time.deltatime expression in our movement code. I added this and now in every physics/movement calculation the game looks at how long the calculation of the previous frame actually took and includes this in the calculation of graphics and physics for the new frame. physics and framerate are now quasi locked together, and the game now runs similar on all systems (even 2-core-systems with integrated graphics) and all graphical settings, YAY!

So now the Changelog v1.2

What's to come in the future?

Well we have a lot of ideas of where we want to go with this simple game mechanic. I guess the next things wil be small additions to the gameloop, some assets and ostacles aswell as some sound and music, that part is really lacking as is.

Some bigger things we want to implement for a probably coffe-priced final release will be procedurally generated levels, customization options, different trees to play with aswell as a local multiplayer vs-mode where two trees compete for reaching the safety of the birch-forest firts.

We are definitely interested what you have to say about the game, things you feel are lacking or would be a welcome addition, bugs, problems concerns, etc. so please try it, play it, enjoy & share and let us know what ou think in the comment section here!

Zwi Zausch and the OddyTree Team.

A tree odyssey, keep your balance and reach the edge of the birch-forest!